– Digital release on major U.S. platforms and long-awaited special collector’s edition Blu-rays of all 130 episodes headline the series’ 50th anniversary celebrations –
– Helmed by horror film legend Vincent Price, FRIGHTENSTEIN is one of the most iconic and influential Canadian television series of all time – 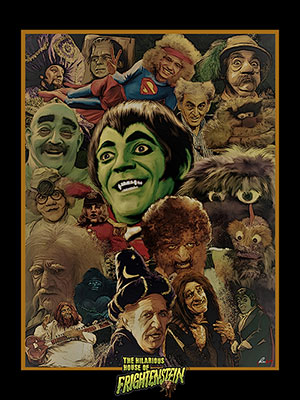 LOS ANGELES/TORONTO (April 14, 2021) — Another lovely day begins in Castle Frightenstein! Unearthed Films announced today, in collaboration with Frightenstein Enterprises International, Trimuse Entertainment, and The Big Pieces Company, it will release all 130 digitally re-mastered episodes of the iconic Canadian cult series THE HILARIOUS HOUSE OF FRIGHTENSTEIN. The announcement kicks-off a celebration of the series’ 50th anniversary, all leading up to a digital release on major U.S. platforms and the release of special collector’s edition Blu-rays of all 130 episodes later this year.

"As a child, I loved THE HILARIOUS HOUSE OF FRIGHTENSTEIN," said Stephen Biro, Owner/CEO of Unearthed Films. “I’m thrilled to be able to give the fans what they want... the whole series to enjoy and share with their children and grandchildren the magic of a spooky kids’ show that is both entertaining and educational."

“I’ve found perfect partners with similar sensibilities to celebrate the show’s 50th anniversary,” said Mitch Markowitz, Co-Producer/Co-Star aka Super Hippy, and CEO of Frightenstein Enterprises International. “We’re excited to introduce the series to a new audience, who we’re sure will appreciate its whimsical, pseudo horror approach to children’s television. FRIGHTENSTEIN is definitely not just for kids; it’s also a perfect late night ‘vehicle’ for teenagers and adults.”

Helmed by horror film legend Vincent Price (House of Wax, The Fly) and Canadian comedian/actor/singer Billy Van (The Sonny & Cher Show, The Hudson Brothers Show), THE HILARIOUS HOUSE OF FRIGHTENSTEIN is one of the most iconic and influential Canadian television series of all time and the longest running kids’ TV show in Canadian history. An instant hit when it debuted in Canada in 1971, this pseudo horror kids TV series attained cult status with children, teens and adults, and is still revered today. Offering a fresh new look and feel to sketch comedy, the series first aired to an after-school audience, inspiring such stars as Mike Myers, Jim Carrey, Russel Peters, Alice Cooper and SCTV's John Candy. California's KTLA successfully aired the show opposite the king of late-night television, Johnny Carson's The Tonight Show, occasionally out rating Johnny!

THE HILARIOUS HOUSE OF FRIGHTENSTEIN was also a groundbreaking format at the time. The comedic-horror format represented a different concept in children’s programs. As producer Riff Markowitz described it, it’s a modular concept with each segment roughly 5 minutes long and an entity in itself. Vincent Price linked the segments together.

In THE HILARIOUS HOUSE OF FRIGHTENSTEIN, Count Frightenstein and his cohorts are banished from Transylvania to Frankenstone. The series follows the adventures of The Count, Igor, Grizelda “The Ghastly Gourmet”, The Librarian, The Wolfman, Bwana Clyde Batty, Dr. Pet Vet, The Professor, and numerous other ‘characters’ live and otherwise, not to mention ‘the horror master host himself’, Vincent Price. Each one-hour episode is a refreshing mix of humor and educational segments, all flavored with the spice of mock horror.

In celebration of 50 years on air worldwide, Unearthed Films will launch an exclusive Unearthed FRIGHTENSTEIN merchandise line, host contest giveaways, showcase archival footage and interviews and more ahead of the digital and collector’s Blu-ray releases. Additional details to be announced soon.

The Markowitz Corporation, with offices in Los Angeles and Toronto, created THE HILARIOUS HOUSE OF FRIGHTENSTEIN in 1971. The company also produced many hundreds of hours of television series including The Hitchhiker, The Ed Allen Fitness Show, Caveat Emptor, a public affairs series, and numerous game shows and HBO and Canadian network specials featuring Red Skeleton (A Royal Command Performance), George Burns, Wolfman Jack, and many more. The FRIGHTENSTEIN series was produced by brothers Riff and Mitch Markowitz. Unearthed Films is the US distributor with The Big Pieces Company handling international sales.

About Unearthed Films
Unearthed Films was founded in 2002 to distribute independent horror films from around the world in the United States and Canada. The company releases films in all media including theatrical, home video, television, and video-on-demand. From its inception, Unearthed has concentrated on cult and horror genres, and has established a unique label brand for fans of cutting edge "horror" cinema. Over the intervening years, our ever-growing catalog of unique titles has attracted a dedicated customer base and made Unearthed Films the "go to" place for discerning horror fans.

About Trimuse Entertainment
Founded by producer John Gillespie and William Alexander, Trimuse Entertainment is a full service, Canadian independent film production & distribution company whose mandate is to develop, produce, and distribute quality motion pictures, nationally and abroad. Since its inception as a distribution company in 1999, Trimuse has acquired and distributed over thirty (30) motion picture and television projects.

About The Big Pieces Company
The Big Pieces Company is a leader in the licensing, marketing, and distribution of motion pictures in all media. Through our extensive global sales and distribution channels, the company is able to reach viewers and fans worldwide. Bringing films of all genres and formats to market, the company maintains successful partnerships with broadcasters and independent film distribution companies throughout the world, ensuring success for every acquisition.